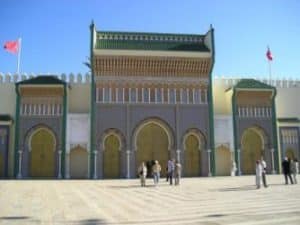 The Royal Palace of Rabat, also known as the Dar El Makhzen, is the official residence of the King of Morocco. It is located in the city of Rabat, which is the capital of Morocco. The palace was built in the 19th century and is a blend of traditional Moroccan and French architectural styles.

The palace is not open to the public, but visitors can admire the palace’s exterior and the beautiful gardens that surround it. The palace is also home to the Royal Guard, who are responsible for the security of the palace and the king.

The palace is located in the heart of the city, and it is surrounded by the beautiful Bouregreg River and the Atlantic Ocean. The palace’s location offers great views, and it is a perfect spot to take pictures and admire the architecture.

The Royal Palace of Rabat is an important symbol of the Moroccan monarchy and it is also an important part of the city’s history and culture. It is surrounded by many other historical and cultural sites such as the Hassan Tower, the mausoleum of King Mohammed V and the Kasbah of the Udayas, which are all worth visiting.